A short introduction to the challenges we are up against, not only as nation states, organizations and individuals but as a species.

Our understanding of the postindustrial world is inadequate. The traditional job market is crumbling and so is the nation state. Solid economic and political structures of the past are deteriorating under the current technological development. In order for politics to be meaningful and for human rights and democracy to survive and thrive, we need to understand the greater patterns in this development.

Digital products and services, social media, mobile apps, etc., have changed our everyday lives in less than a decade. In fact, most of us use technologies on a daily basis that were wild science fiction 40-50 years ago when computer science first became established in Western universities. For most citizens and policymakers, the dramatic impact of the still exponentially growing information and communication technologies (ICT) is only starting to become apparent.

Today, a convergence between the bio-, info-, nano- and cogno- (BINC)(1) technologies develops the living and intelligent technologies of tomorrow. We are entering the BINC Age. All developed countries participate in the making of the BINC technologies and they are about to take off like computer science did a little more than a generation ago, and this development is enhanced by the already implemented ICT.

This is important, because democracy, politics, rule of law, human rights, the market economy, capitalism, the creation of money, the banking system, and even our schools and local communities are products of the industrial age and its technologies. As individuals we have learned to navigate the industrial economy and as societies we can somewhat control and define it with politics and legislation. But nobody has a clue what the global economy is going to look like in the postindustrial age of the BINC technologies.

The industrial economy grew out of austerity and a need for more of everything; more was simply better. Increased productivity satisfied real demands and brought cheaper goods, it also allowed for a development that meant fewer hard jobs, more fun and interesting jobs, shorter work hours, and longer vacations.

The BINC economy grows out of a situation where, in the richest parts of the world, more is not better. We are already sick from over-eating. Increased productivity may lead to cheaper goods but few need more, instead we just turn the Earth’s resources into trash faster and we must consume in order to stay employed.

The BINC technologies allow for a world of plenty with virtually no waste. Some 2-5% of the population will be able to develop, produce and distribute what everybody needs. It is a world where everybody could have their own personal fabricator, just like we have personal computers and printers at home today. We could design or download the code for goods we need and produce almost anything at home. As these goods have life-like properties most can be recycled; technology becomes like biology and part of the natural cycles in nature.

(1) In the sciencetific community, these new technologies are sometimes referred to as NBIC, and not BINC. However, having presented these technologies to thousands of lay-people, in our experience people both connect to and remember the word “BINC” and it allows us to talk about the coming BINC Age with non-scientists in a way that engages people.

Throughout history, whenever new technologies have changed the means of production and communication they have transformed societies and cultures (see summary table below). We therefor anticipate that due to the development in the BINC technologies, societies globally face a transformation that could be as drastic as the transformation from the Stone Age to the Bronze Age or from the pre-scientific, agricultural society to the Industrial Age. Such changes redefine the very structures and workings of economy, governance, sovereignty of nation states, balances of power, environment, the human condition, religion, and much more. This time, however, these major changes will not happen over centuries as was the case with the transition from, say, the Bronze Age to the Iron Age. It may happen within a generation or two. 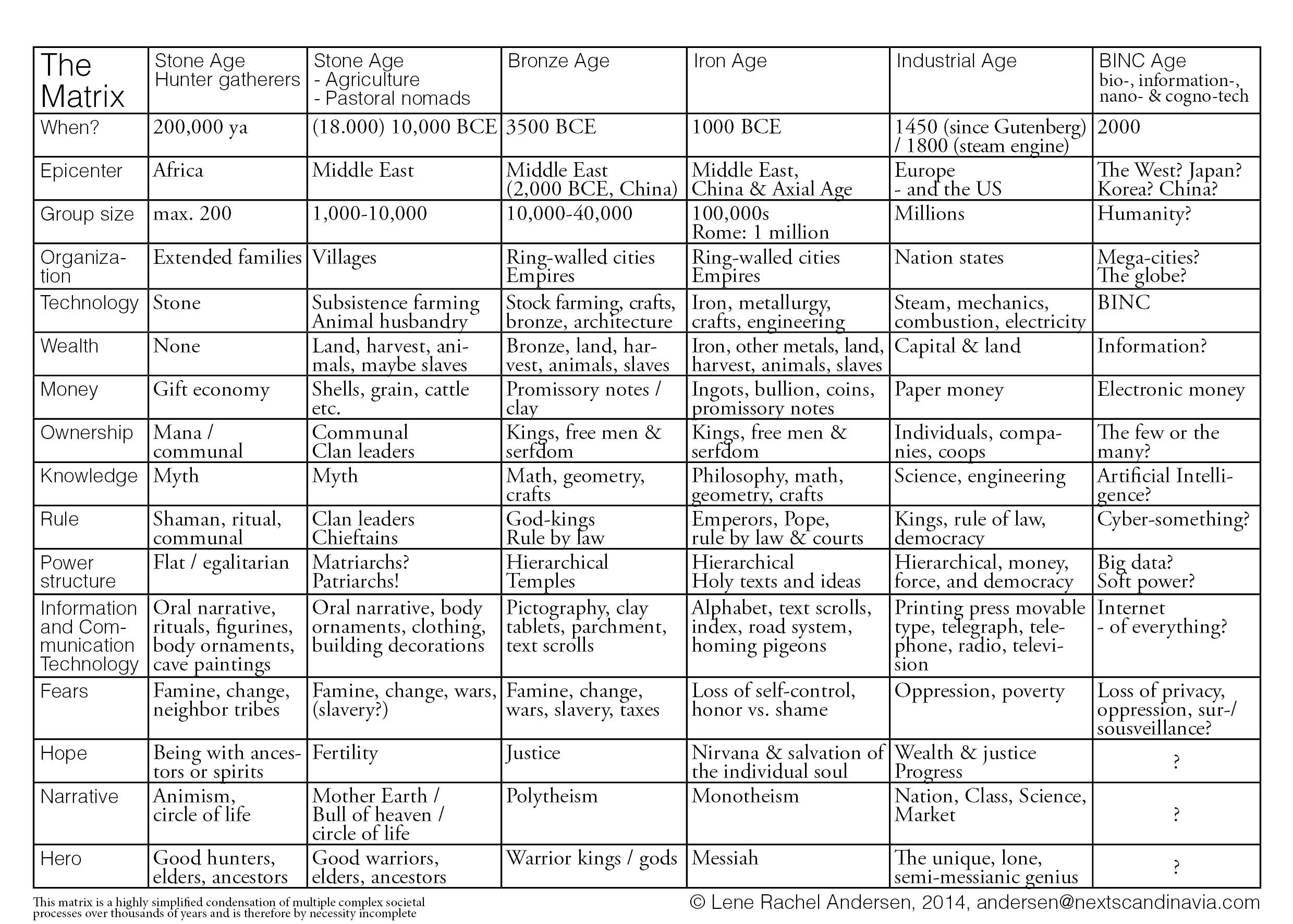 What we see happening

Within and between the nations we see indicators of this current transition. Among these indicators are the working poor, lack of privacy due to abuse of big data, challenges concerning secure and sustainable energy systems, international taxation issues regarding corporations, a rapidly growing and mainly speculative financial market, increased consumption of psycho-pharmaceuticals, and a radically transforming and diminishing job market mainly due to automation and digitization. The latter concerns not only blue-collar jobs, but also white-collar jobs. An even more worrying indicator is the number of people in the West who are attracted to fundamentalist religion and nationalist movements in search for simple answers to the complex changes.

The components that make up this critical transformation from the Industrial to the BINC Age are concrete and clear and can be grouped into four major areas: (i) the digital economy, (ii) the erosion of the middle-class and the nation state, (iii) the interconnectedness of the entire globe, and (iv) the narratives we use to make sense of the world. Please note that these four areas are not aligned along the traditional categories: technology, economy, environment, legal framework, or cultural narrative etc.; their interaction creates the global transition. We have summarized the development in 18 documented theses, which we believe make the transformation pattern easier to see.

The digital economy is a fundamentally different kind of economy:

In the developed economies the middle class is crumbling. This will eventually happen in the rest of the world too; as the jobs disappear, the middle class is getting poorer and the rich are getting wealthier and dominate the political power while the nation state is losing its sovereignty:

The global interconnectedness also means global interdependency and that no nation state can solve any of the challenges on their own:

It becomes harder to make sense of the world as the technological development is out-maneuvering politics while changing the workings of the economy and society both nationally and globally.

To preserve sustainable economies, human dignity, Human Rights, democracy, and social calm these issues must be taken to the forefront of practical national and international politics. In a world were knowledge is viewed as an indisputable asset for economic growth, this same knowledge must be put to work to understand the current transformation of the global economy and community and to address and develop sustainable and desirable paths forwards. A continued belief in the narrative that a free market and the nation state will resolve our current dilemmas is naïve. We need to recognize reality as it is and not as it once was.

The BINC Age offers us the opportunity of meaningful work, leisure time, prosperity, and freedom for all. With the right political, legal and economic structures and institutions and with the best possible implementation of the BINC technologies, we can shape the world to meet our highest hopes. We have to develop visions for inclusive and sustainable societies, while recognizing how the new technologies are in the process of changing the very foundation of the human condition. If we are wise, we can use the emerging BINC transition to move everybody beyond austerity and into a world of plenty. However, apathy could allow the BINC transition to bring our world into a new dark age, a dystopia controlled by a tiny elite.

Tomorrows Technology Will Lead to Sweeping Changes - Article in The Conversation